Shirley, my mother-in-law handed me this heavy wooden case probably 7 years ago, when they were packing up their house to downsize into an apartment in a Senior building. I had opened it, and I knew it was an old sewing machine. It wasn't a treadle machine which I had been desiring for a while, and the wiring frankly looked terrifying, so I put it away in the basement and basically forgot about it. It wound up in the garage during the move almost 4 years ago, and I finally opened it up and really took a look at it today, while sorting through our stuff for a garage sale in a couple of weeks. 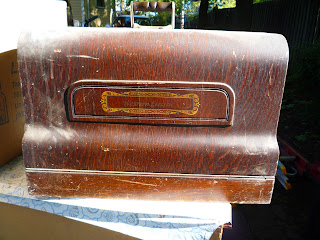 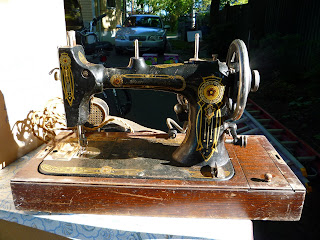 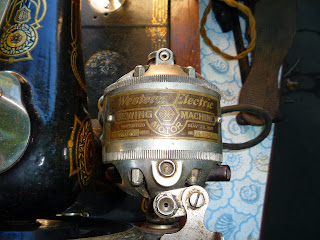 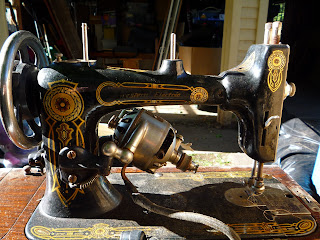 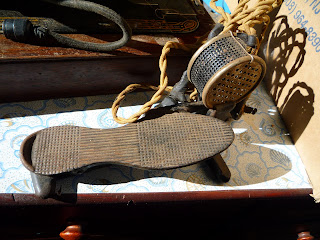 There is a compartment at the back of the machine with a sliding cover. Inside what I thought was a bag of needles, were also two bobbins, a hemming foot, and the quilting attachments!


I was thinking simply about selling this, but the people at quiltingboard.com have convinced me to have it restored instead. There is a gentleman there who does this work for a very reasonable amount of money (thankfully, because I think the shipping costs are going to be outrageous - this thing weighs a TON), and had already offered to spruce the old girl up.

From some quick research on the Internet, I managed to find the owner's manual on line, which is great because it explains how to care for the machine, how to thread it, wind bobbins and use the attachments.

The serial # is on the motor only and is 2B708408. I could not find anything on line indicating when it was made specifically. However, I did discover that National Sewing Machine made the actual sewing machine (and put the W.E. label on it) in their factory in Illinois, and Western Electric made the motor.

The motor is stamped with a patent date of May 22, 1917, and the website that told me about the mfr of the machine itself said that Western Electric stopped making these in 1918. So it seems that the machine was built in 1917 or 1918, and I may not necessarily find out exactly when.

Of course, it's got that "fussy" bobbin casing that I hate, and hopefully it won't give me a lot of tsuris when I try to use it. It may be a very nice machine to teach people with; I doubt that it runs terribly fast, and I expect it to be a fun and relaxing machine to use for piecing.

I also like how it's about the same age as my house, so it kind of "matches". I am looking forward to using it. Maybe I'll have it back in time for my birthday!
Posted by @wendydesigns at 10:47 PM 6 comments:

Finally got to play with fabrc over the weekend!

I had an opportunity to take a much-needed break from the recovery (reorganizing) from all the renovations, and attended the Anna Faustino workshop that one of my guilds held yesterday. She taught us her "no sew" fabric weaving techniques. It took me about 5 hours to make this: 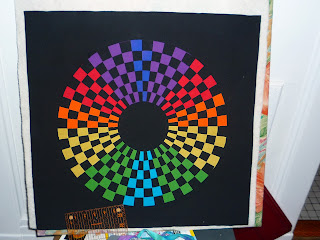 Of course all the prep work was done ahead of time by Ms Faustino; which consisted of a whole lot of accurate drawings on fusible web, and then fusing the web to the black fabric. We were doing the cutting and the weaving.

I still have to finish this piece - I'm not sure what I'm going to do yet in terms of quilting or embellishments. I may even add a border or something, since it's maybe 36" square at this point.

I hope to return to regular blogging now that things are almost back to "normal"... I'm back on costume duty again, for the fall production at the High School: Romeo & Juliet, so I don't know if I'll be doing much quilting in the next few months or not.
Posted by @wendydesigns at 9:50 PM No comments: